Orangette and Primrose and the Great Disappointment

Mrs. Montague, the butcher's wife, decided to elevate the tone of the village by introducing a book club. Truth be told, our two friends are not great readers. Orangette would glace at the funnies in the village paper from time to time and Primrose is strangely devoted to the life and times of Dr. Dolittle, and that is pretty much it. However, an evening of tea and gossip with the ladies is not to be missed, and they both signed up. 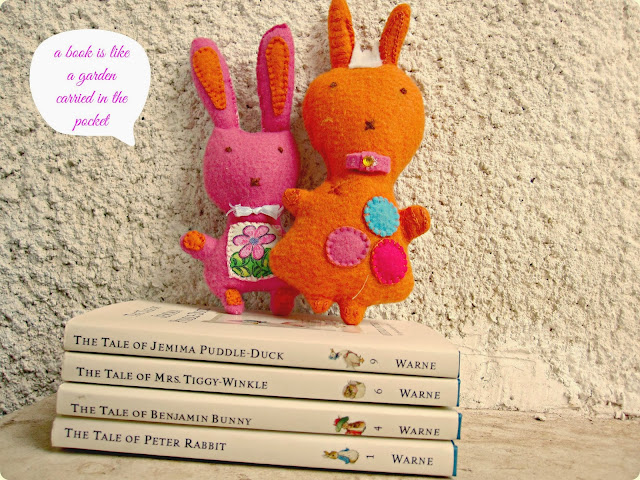 On the evening of the first meeting the two arrived with a banana-cream pie and high expectations. It was not long before disappointment settled in - instead of tasty tidbits and the latest going-ons, the ladies delved right in and began talking books. Will they begin with the perennial favorite Austen or a Russian classic? One of the Bronte sisters or something quite modern? Primrose was planning to suggest Beatrix Potter but thought better of it in this highbrow company. And when it was decided to read no less than six chapters of The Pickwick Papers by the following week, Orangette and Primrose began to feel quite certain that they would both have an awful headache on that day.

Posted by handmade by amalia at 7:00 AM

© Copyright 2011-2019 Amalia Rosen. All rights reserved.
All the content on this blog - poems and photos - is original and my own. Please don't use without my permission.